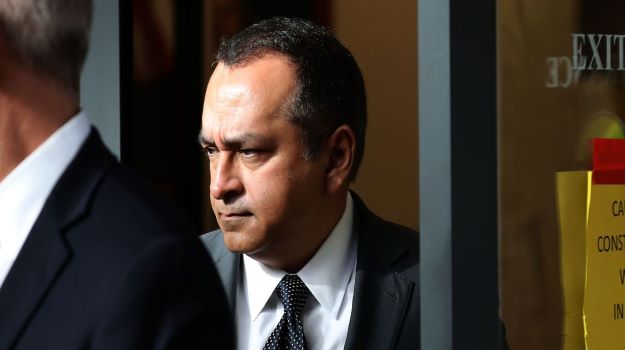 More than two months after Elizabeth Holmes was found guilty of fraud, the trial of her business associate and one-time romantic partner Ramesh "Sunny" Balwani has finally begun. Like Holmes, Balwani faces multiple counts of fraud related to the business practices of Theranos.

During opening remarks, the prosecution painted Balwani, the company's former president, as working hand-in-hand with Holmes as the duo fed false information to investors about its proprietary blood-testing technology. U.S. Assistant Attorney Robert Leach, who also prosecuted Holmes, told jurors that Holmes and Balwani, who served as chief operating officer, were "partners in everything, including their crimes," Fox Business reported. Leach said the two Theranos executives lied to investors to secure hundreds of millions of dollars to bolster Theranos.

"This is a case about fraud. About lying and cheating to obtain money," Leach said, according to the report. "He did this to get money from investors and he did this to get money and business from paying patients who were counting on Theranos to deliver accurate and reliable blood tests so that they could make important medical decisions."

In contrast, Balwani's attorneys painted him as a savvy businessman who was already highly successful when Holmes dropped out of Stanford at 19 to found Theranos. During his opening remarks, Stephen Cazares told jurors that when Balwani stepped down from his C-suite roles at Theranos in 2016, he left the company in a strong financial position. At the time, Theranos had a valuation of approximately $9 billion. His departure was also right around the time that whistleblowers began leaking information about the failures of the company's blood-testing devices.

The prosecution's arguments will likely mirror that of Holmes, which included copies of text messages shared between her and Balwani during their long romantic and business partnership. The specter of some accusations made by Holmes against Balwani during her own trial will also likely play a role in the case. During her testimony, Holmes described the relationship she entered into with Balwani as "controlling and abusive." She testified that he groomed her in business and also forced her to engage in sexual activities following heated arguments in order to prove his love for her.

Cazares is seeking to deflect those accusations from Holmes.

"The headlines and sensational stories about Elizabeth Holmes have no place in this trial," Cazares said, the Guardian reported.

Other witnesses who testified during Holmes' trial are also likely to reappear for Balwani's day in court, including some of the whistleblowers who first brought attention to data manipulation at the company.

It is unknown whether or not Holmes will testify against Balwani. She is currently free while awaiting sentencing, which is scheduled for September.

Balwani is facing multiple counts of wire fraud and conspiracy to commit fraud. He and Holmes were both charged by the government in 2018 but were given separate trials. Balwani has pleaded not guilty to all charges. His trial is expected to last about three months.