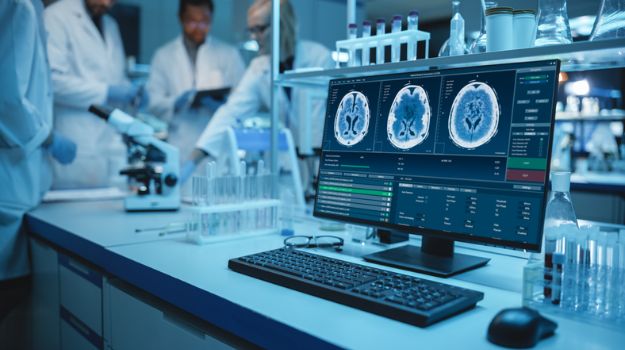 A man paralyzed from amyotrophic lateral sclerosis (ALS) now has the ability to spell out his thoughts, thanks to an implanted electrode device that reads his brain signals. One of his first sentences was, “I love my cool son.”

The news is heartwarming, not just for the man’s son, but also for the roughly 200,000 other people worldwide who have been diagnosed with ALS. This could be the start of a new era of using brain implants to treat a variety of diseases.

ALS, also known as Lou Gehrig’s disease, is a condition where motor neurons gradually break down and die. As the motor neurons die, the patient loses the ability to move certain muscles. The disease progresses until the patient can no longer care for themselves or communicate, and most patients die within five years of being diagnosed.

Currently, patients with advanced ALS can communicate thoughts by using eye movements to indicate letters or words on a screen. But eventually, patients lose that ability too and could spend a significant portion of their life not being able to communicate at all.

Several methods have been tested to help ALS patients communicate. In 2016, researcher Mariska Vansteensel, a brain-computer interface researcher at the University Medical Center Utrecht, pioneered a new technique. Vansteensel and her team created a series of brain implants in a woman with ALS that could detect her attempted hand movements to spell out letters or words. However, the patient in that study still had some minimal hand and eye movement, so the study was not deemed feasible for many ALS patients.

But researchers in Germany wanted to take that brain implant technology a step further. At the University of Tübingen in 2018, researchers met with the ALS patient. At the time, he still had the ability to move his eyes. He wanted to be able to communicate with his wife and son, so he agreed to an experimental procedure.

Researchers implanted two electrodes into the patient’s brain. After three months of testing, they were finally able to use neurofeedback to help the patient communicate. The implants made a musical pitch that matched the speed of electrons firing in the patient’s brain: a higher pitch as electrons sped up, a lower pitch as they slowed down. Researchers told the patient to try to change his thoughts to affect the electron speed. Soon, he could change his thoughts and was able to match musical pitches from the researchers.

“It was like music to the ear,” said Ujwal Chaudhary, a biomedical engineer and neurotechnologist at the German nonprofit ALS Voice.

Eventually, the researchers and the patient worked together to create systems of tonal communication. By making certain tones, the patient could indicate yes or no, and later was able to indicate specific letters. Letter by letter, the patient was able to spell out whole sentences, including telling his son that he loved him.

The idea of using brain implants could have a huge impact on a variety of diseases and conditions. For example, neurotechnology powerhouse NeuroVigil recently presented at the New Technology & Mental Health Conference keynote during Dubai’s World Expo. The company showcased iBrain™, a brain implant that can help speech-impaired patients communicate. It has been tested on patients with ALS, brain cancer, Parkinson’s disease and severe drug overmedication.

Similarly, BioCorRx, a company that focuses on treatments for addictions and neurological disorders, recently announced it had received Independent Institutional Review Board (IRB) approval for the company’s Phase I clinical trial of BICX104. The drug is an implantable biodegradable naltrexone pellet designed to treat patients with opioid use disorder. The implant can block some opioid receptors in the brain and reduce cravings.